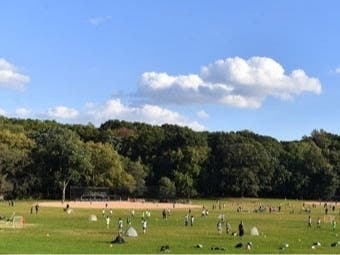 The Prospect Park Alliance announced Tuesday that Long Meadow Ball Fields “4” and “5” have reopened following a $1.25-million renovation. The fields are the latest of the park’s seven baseball fields to get a facelift as part of a years-long project to update the Long Meadow play spaces.

The renovation to ballfields four and five was funded by Council Member Brad Lander.

“I’m so glad that the restoration of the Long Meadow Ballfields 4 + 5 is complete in time for ball players to enjoy them this fall,” Lander said. “Our parks and play areas are a critical resource, especially during this pandemic, to keep our communities happy, healthy, and connected.”

Fraser — Macomb County will receive $12.5 million to settle a lawsuit it filed against contractors that caused a sewer collapse and football-field size sinkhole on Christmas Eve 2016.

Macomb County Public Works Commissioner Candice Miller said Tuesday the insurance company for the three contractors sued by the county agreed to pay the settlement after about a week of mediation.

“I’m very proud to tell ratepayers … that we have come to a settlement agreement of $12.5 million,” she said during a morning news conference held near the site of the sinkhole that opened up on 15 Mile near Utica Road in Fraser. “That’s the biggest award that the Macomb County government has actually ever received in history. We’re feeling pretty good about the award.”

Macomb County Public Works Commissioner announces Tuesday the contractors it sued over a sinkhole that appeared Dec. 24, 2016 on 15 Mile in