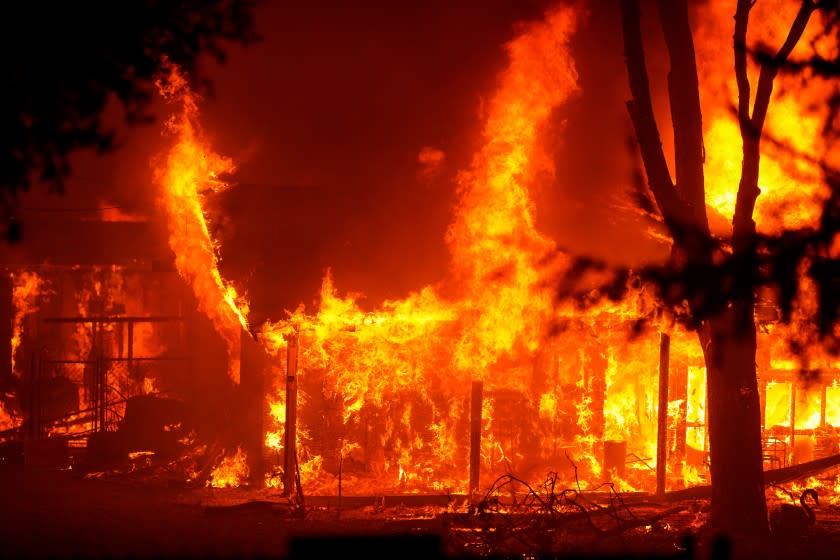 Another series of wildfires stormed California’s wine country overnight as flames destroyed numerous homes and other buildings in Napa and Sonoma counties and forced thousands to flee.

A number of homes began to burn early Monday in the suburban eastern neighborhoods of Santa Rosa. The city of 177,000 residents, Sonoma County’s most populous, was devastated three years ago by the Tubbs fire, which was also driven by strong winds and destroyed about 1,500 homes in the 1980s-built northwestern Coffey Park neighborhood.

Whipped by powerful, hot and dry Diablo winds coming from the north and east, which showered embers onto the city, the fire engulfed houses in the area of Mountain Hawk Drive, which is lined with two-story tract homes in the Skyhawk development, built in the late 1990s and early 2000s.

The number of structures lost was unclear as of Monday morning.

Large swaths of Santa Rosa remain under mandatory evacuation orders. Districts in the city’s northeast were ordered to evacuate, including the neighborhoods of Skyhawk, Melita, Stonebridge, the Oakmont Gardens retirement community and Pythian.

Evacuations also were ordered Monday for the Summerfield and Spring Lake areas, according to the Santa Rosa Police Department.

With flames in the distances, busloads of older people were evacuated from the Oakmont Gardens assisted-living community. Elsewhere in the city, cars jammed narrow roads as residents heeded evacuation orders.

Two other fires were also burning upwind of the fire encroaching on Santa Rosa, both of them flanking the town of St. Helena in Napa County: the Boysen fire to the west and the Glass fire to the north.

The Glass fire burned rapidly Sunday through Napa Valley’s famed Silverado Trail, known for its wineries. One building in flames was the distinctive stone structure at the Chateau Boswell Winery, which marked its 40th anniversary last year, several miles northwest of St. Helena.

The California Department of Forestry and Fire Protection has since grouped the Glass, Boysen and Shady fires together as the “Glass incident.”

That combined conflagration had burned 11,000 acres with no containment as of Monday morning, according to Cal Fire. It was threatening 8,543 structures.

Ash could be seen falling from the sky throughout the region.

“The fire has been at a dangerous rate of spread and has expanded into Sonoma County,” officials wrote in a morning incident update.

Evacuations were ordered Monday morning for the city of Calistoga from south of Lincoln Avenue, officials said.

A mandatory evacuation zone included the western portion of St. Helena, an area that includes single-family houses and a campus of the Culinary Institute of America, a renowned culinary college.

“Individuals who are seeking shelter are reminded to bring a face covering, practice good hygiene habits and adhere to physical distancing,” Napa County officials wrote in an evacuation update, underscoring the continued threat posed by the COVID-19 pandemic.

Officials on Monday also ordered a round of evacuations in Sonoma County covering Trione-Annadel State Park and the area to the south, as well as north of Bennett Valley Road, west of Savannah Trail and east and south of the Santa Rosa city limits.

The now-unified wine country fires were burning in an area that had not experienced a major burn in the last century, Matt Roberts, a doctoral student in atmospheric science at the University of Nevada at Reno, said in a tweet.

The Diablo winds have plunged much of Northern California into a red flag warning, meaning the National Weather Service is highly confident there will be dangerous fire weather conditions.

Such windy conditions can easily loft embers into the air, where they travel and land downwind, igniting new spot fires.

The warning is in effect until 9 p.m. Monday, with forecasters predicting critically low humidity and wind gusts that could reach up to 50 mph at high elevations. The Bay Area is also under a heat advisory until 7 p.m. Monday.

In Butte County, where the deadly North Complex fire is still burning, the Sheriff’s Office issued an evacuation order Sunday night for Pulga, Concow, Big Bend and Yankee Hill, as well as an evacuation warning for the town of Paradise, which was mostly destroyed in the 2018 Camp fire that resulted in 85 deaths and the loss of more than 18,000 structures.

Strong winds were reported in Shasta County, where a fast-moving wildfire ignited Sunday afternoon near the rural community of Igo, about nine miles southwest of Redding. The blaze grew from 50 acres to 400 acres in about half an hour, according to Cal Fire, prompting evacuation orders and sending up a massive plume of smoke.

Named the Zogg fire, it had swelled to 15,000 acres by Monday morning and prompted numerous evacuations. The blaze is 0% contained.

The latest rash of wildfires adds to what’s already been a historic and devastating fire season in California. So far this year, over 8,100 wildfires have ignited statewide — burning more than 3.7 million acres, killing 26 people and consuming over 7,000 structures.

Five of the six largest wildfires ever recorded in California have started since August and are still burning, according to Cal Fire.