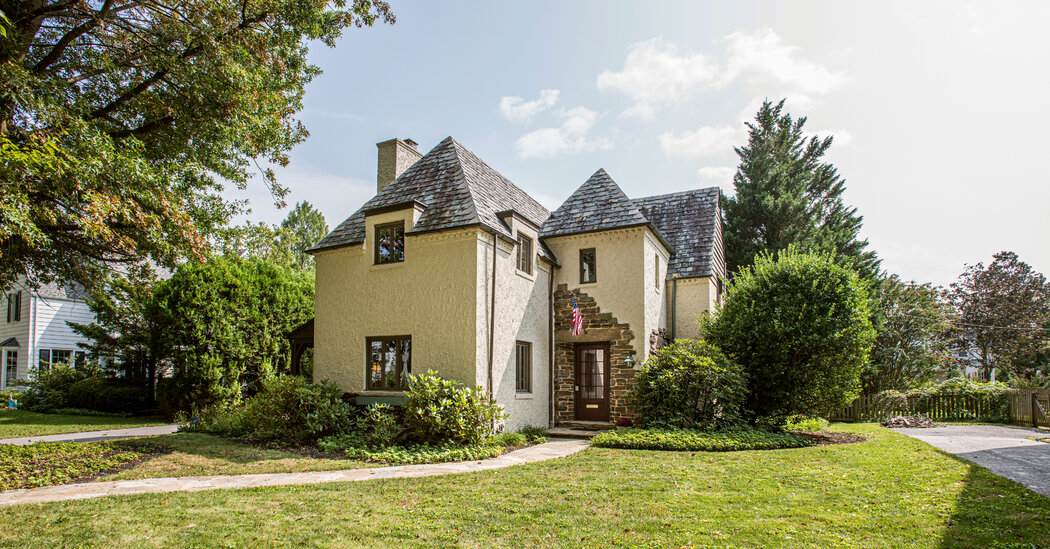 A 1937 Tudor house (with a big dash of French eclectic style), with four bedrooms and three and a half bathrooms, on a 0.27-acre lot

This stucco-and-stone-clad house is in Baltimore County, a few blocks north of the Baltimore city line, which puts it within easy distance of downtown workplaces and cultural activities (the National Aquarium, for instance, is 20 away minutes in light traffic), yet means it is subject to the county’s lower tax rate.

It is in the Pinehurst neighborhood, where most houses date from the 1920s to the 1940s, the streets have leafy canopies and the median sale price is about $660,000. Hunt Valley, a business and shopping hub, is about 11 miles north. The sellers have owned the property for 27 years and have made a number of structural interventions. They dug out the basement to increase its height and built a detached garage with a copper roof that stylistically echoes the slate roof on the main house. They also raised the ceiling of a bedroom addition to give it more period character.

Indoors: The front door leads into a foyer with plaster walls and hardwood floors, which continue throughout the house’s original portion. To the left is a living room with a wood-burning fireplace surrounded in brick and topped with a white-painted mantel. A screened porch with fieldstone flooring and a plank ceiling is off to the side.

Straight ahead of the front door is a formal dining room with a cutaway entrance that brings in additional light. The casement windows have been upgraded to double-pane, but retain a period style, and a swinging door leads into a hallway off the eat-in kitchen. The kitchen is wrapped in cherry-wood cabinets with Corian countertops and has a central island.

Beyond the dining room is a family room that is part of a two-story addition built by a previous owner; it has French doors opening to a rear deck and connects to the expanded kitchen’s breakfast area, with its cherry-colored wainscot. A half bathroom is next to the kitchen.

Upstairs, a door encloses a bedroom at the front of the house along with a hallway closet and bathroom, creating a master suite. A second, skylighted full bathroom and a walk-in closet are in the rear addition. There are four second-floor bedrooms in all.

The finished basement includes a family room or office with a paneled wainscot, ceramic-tile flooring, a niche for a desk, a full bathroom, a laundry room and a boiler room. A door opens to a short exterior staircase leading up to the driveway and the one-car garage.

Outdoor space: The family room walks out to a long stone patio with low stone-and-stucco walls. Beyond is a fenced yard with a basketball court. The garage has a pull-down attic and an adjacent storage area.

A house built in 1984, with four bedrooms, two full bathrooms and two half bathrooms, on a 0.52-acre lot

This house is in Sandia Heights South, a neighborhood of custom homes dating mostly from the 1970s to the 1990s, and is designed in a rambling way to allow views of the Sandia Mountains and other natural landscape features to be appreciated from every window and from the 360-degree deck. It is 14 miles northeast of downtown Albuquerque and about three miles southwest of the Sandia Peak Tramway, which takes you up to the 10,378-foot crest.

Indoors: Irregular walls of adobe brick are interior features, joined by flooring of herringbone brick and pine, timber ceilings with hand-peeled vigas and adobe fireplaces built by local masons. The sunken living and dining room has all of these, plus a wet bar under a free-standing adobe arch and wrought-iron chandeliers. The fireplace wall is adorned with Native American petroglyphs, including one picturing Kokopelli, the fertility god.

The kitchen is through an archway, to the left of the main entry (another entrance is from the dining room). It has clerestory windows, a walk-in pantry, a built-in desk and china cabinet, and a kiva fireplace. Glass doors lead out to a patio with another fireplace.

Four bedrooms are on the main level and include a carpeted master with a fireplace, a picture window and access to a private courtyard with a hot tub. The master bathroom contains a tub sunk into a tiled pedestal, a curvaceous walk-in shower and vanities on opposite walls.

The upper level has multiple seating areas on the large landing, a bonus room and a bathroom trimmed in colorful stone tile, with a steam shower.

Outdoor space: Patios on the east and west sides of the house foster the enjoyment of sunrise and sunset. A deck wraps around the upper level and overlooks a private putting green. The garage can accommodate an RV or boat.

A former Girl Scouts camp with a three-bedroom, two-bathroom main house, four one-room cabins and a communal bathhouse, on 50 acres

Operated as Camp Blueberry Hill by the Girl Scouts from the 1950s to the 2000s, this property in Sullivan County in the Catskills fell into disrepair and was rehabilitated by Avishai M. Adiv, a Brooklyn-based developer who is also the real estate agent. It is zoned for residential or agricultural use, which suggests a possible future life as a family complex or bed-and-breakfast.

The camp is about six miles southeast of the hamlet of Livingston Manor, with its farm-to-table restaurants and sporting outfitters that assist those who wade into the local waters to fly-fish (the area is something of a capital for the sport).

A placard on one cabin pays tribute to Hattie Zalkin, a camp benefactor who persuaded the Girl Scouts of America to remove lard from their cookies and thus achieve kosher certification, Mr. Adiv said.

Indoors: The two-story main house, or lodge, was renovated from the studs out, and all of its systems were upgraded. The open room on the lower level has a 20-foot ceiling and a vintage wood-burning stove inherited from the Girl Scouts and installed under a metal-and-blown-glass chandelier. The wormy chestnut floorboards were salvaged from a group of old cabins in Ohio. (The buyer will be able to choose the finish.) The corner kitchen has stainless steel appliances, including a Viking stove, Fisher & Paykel refrigerator and Bosch dishwasher. The two first-floor bedrooms are served by a bathroom with a combined tub and shower and star-patterned floor tile. A similar bathroom with floral tile is part of a second-floor bedroom suite.

One of the four cabins was too damaged to restore and was replicated by a local woodworking company. All four received new metal roofs and wood decks and have electricity and Wi-Fi. The bathhouse includes three private bathrooms, a laundry room with stacking appliances, an exterior wash basin left by the Girl Scouts and an outdoor shower.

Outdoor space: A stone chimney with a fireplace stands next to an open pavilion structure. There is also a firepit. Mr. Adiv’s business partner, Joshua Roth, said a million pounds of red shale were used to repair the quarter-mile driveway that extends from the entrance (where a bridge crosses a trout stream) to the camp buildings.