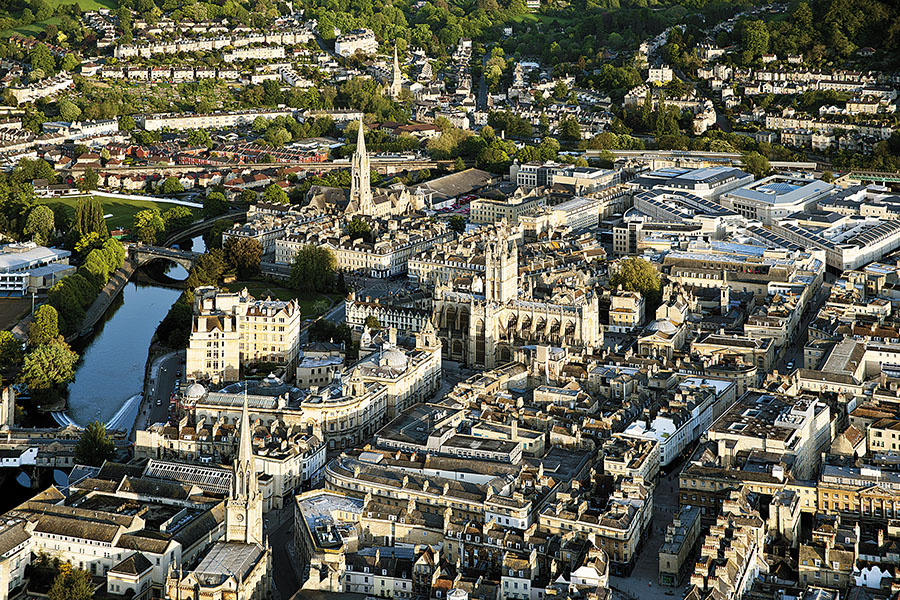 Despite Bath’s allure as a tourism destination, it remains vulnerable to pressures of develop-ment and climate change
Image: Shutterstock

Nestled between the rolling hills of Somerset beside river Avon, just two hours by train from the hubbub of London, sit the Palladian buildings of Bath, a city founded by the Romans in 1st century AD as a thermal spa. The Roman bathhouses and the city’s enthralling architecture have earned it the status of a Unesco World Heritage Site.

Called the ‘Monte Carlo of Britain’, Bath became a thriving spa resort, attracting the fashionable sections of society from 17th century onwards. They flocked here looking for both a cure for their illnesses—“take the waters”, as it was once known—as well as the perfect spot to hobnob. Today the city hosts one of the world’s best-preserved Roman Baths, the Gothic splendour of Bath Abbey, the 200-year-old Royal Theatre, and the Queen Square complex with its unique edifices. Interlinked spaces formed by crescents, terraces and squares blend seamlessly into lush greenery.

Incredibly, many of the city’s Roman attractions, several of which are subterranean, still exist in excellent condition, and are visited by over a million tourists every year. “Though there has been some loss of Georgian buildings elsewhere, Bath remains remarkably well-preserved despite its provenance going back more than 2,000 years,” says my local guide, as we walk on Roman pavements past the Temple of Sulis Minerva, the Roman town of Aquae Sulis, and the bath complex.

Located next to the excavated Roman Baths, the thermal springs were reopened to the public in 2006 in a fresh, new avatar as Thermae Bath Spa, consisting of an ensemble of Georgian buildings accented with contemporary flourishes. “The spa is the only place in Britain where you can bathe in naturally warm, mineral-rich waters as the Celts and Romans did,” the guide adds. The spa, which extends over several floors, also hosts the New Royal Bath that was designed by feted English architect Sir Nicholas Grimshaw by fusing glass, stone, light and water as design elements.

Despite Bath’s enduring allure as a tourism destination, it remains vulnerable to pressures of modern development and climate change. The biggest challenge, say local conservationists, is to juggle the demands of a modern metropolis and popular tourist attraction with those of conservation required in a Unesco World Heritage Site. Encroachment on the city’s green belt doesn’t make it any easier.

“All conservation work in the city is done strictly as per an extensive body of documentation based on respect for the scale and rhythm of the structures,” says Georgina Lennox, a Bath-based conservator. “Any development that can be detrimental or not justify the inscription of the World Heritage property, or its setting, are strictly prohibited.” Governmental guidelines on protecting the city’s historic environment and heritage status are enshrined in the National Planning Policy Framework, which lists policies “to protect, promote, conserve and enhance World Heritage properties”.

The Bath Preservation Trust deals with the ‘moderni-sation’ threats to the city, and participates in the planning and development processes
Image: Joanna Robinson

Heritage in the UK is usually protected under two legislations, adds Lennox. Individual buildings, monuments and landscapes are designated under the Planning (Listed Buildings and Conservation Areas) Act 1990, and the Ancient Monuments and Archaeological Areas Act 1979. But in addition to government directives, private sector participation has further bolstered attempts to preserve the city. The Bath Preservation Trust, founded in 1934 by concerned citizens, has been a crucial element in the efforts to preserve the city’s architectural heritage.

“Visitors to Bath see a beautiful showpiece, with its honey-coloured stone, wide streets, green parks and well-preserved and striking 18th century architecture,” says Caroline Kay, CEO of the Trust. “What we see today, however, was in the 20th century under threat from destruction, not just from bomb damage in World War II, but also in order to build new roads and housing schemes, grand ideas for redesign and a burning desire to ‘modernise’ at all costs.” Fortunately the Bath Preservation Trust, she adds, founded to defend the built heritage and green setting of the city from these sorts of threats, was able to stop some of these plans and instead encourage the creation of legislation and planning guidance that would preserve and protect the city. The extent of the turnaround can be judged by the fact that by 1987 the city found its way to the World Heritage List, one of the few whole cities, like Venice, to have such an honour.

There are still threats to the city, mostly through neglect and inappropriate development, says Kay. The Trust continues its work in responding to and participating in planning and development processes; its at the forefront of discussions on making old houses more energy efficient to meet the green agenda, and helps local citizens by offering free heritage advice. It also runs a small scheme for physical improvements to the city, details like the carved street signs that give it so much of its character.

Ironically, the painstaking efforts invested in maintaining a heritage city like Bath is in stark contrast to how such sites are treated in India. Of the 1,300 heritage structures in New Delhi, only 700 exist now. Even of these, only 174 are protected by the Archaeological Survey of India. Other Indian states are equally guilty of neglecting their cultural heritage, with routine flouting of maintenance regulations, air pollution, and the burgeoning urban sprawls usually identified as villains. 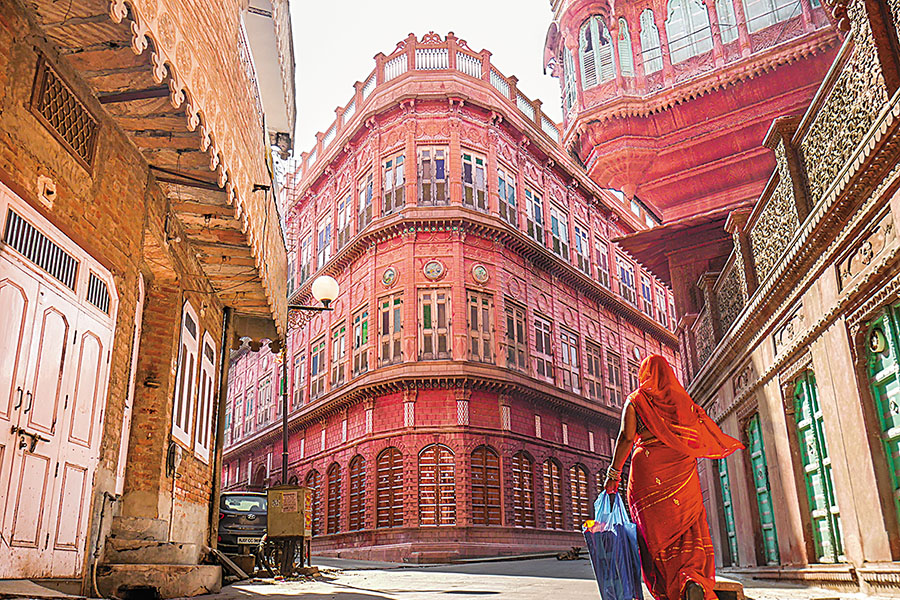 Bikaner was once home to over 1,200 havelis. While many have been razed, others have been converted into hotels
Image: Shutterstock

For instance, Bikaner was once home to Rajasthan’s havelis, exquisite homes to royalty and wealthy merchants. Now they look like concrete skeletons hollowed out by the passage of time. Many stand converted into hotels. “Bikaner was once home to over 1,200 beautiful havelis, which highlighted the syncretic culture of India. But, look at their condition today. Many have been razed; others are vanishing before our very own eyes,” says Pratap Singh Bheel, who conducts heritage walks in Bikaner’s old town.

While in India’s only Unesco Heritage City, Ahmedabad, efforts are afoot to preserve clusters of settlements identified as places of `historic value’, there’s no such enthusiasm evident to protect scores of other sites peppered across the country. Some experts point to the lack of finances as a bottleneck. The ministry of culture, they say, receives well under 1 percent of the country’s annual budget for the upkeep of heritage buildings, a pittance given the considerable number of such buildings in India.

Vijaya Amujure, director, Architectural Heritage Division, Intach (Indian National Trust for Art and Cultural Heritage), says the lack of money isn’t the problem; it’s the political will and vision that’s missing. “Preserving cultural wealth in India is just not seen as a priority. People can demolish heritage structures with impunity without any punitive measures being taken against them. This can only be addressed by educating the public about the importance of our heritage, and to try and make them stakeholders,” she says.

Amujure points to the fabled Jain temples of Chanderi (Madhya Pradesh) and Tamil Nadu and how they are being vandalised right under the noses of local administrators. “Many of these beautiful ancient temples have been painted with acrylic colours despite a High Court ruling against using synthetic paints on such delicate heritage structures. What is this if not gross negligence?” she asks.

In this year’s annual budget, Finance Minister Nirmala Sitharaman outlined a slew of culture-friendly measures, raising hopes that the government is finally paying attention. These include the establishment of an Indian Institute of Heritage and Conservation under the ministry of culture, development of five archaeological sites as world-class attractions at Rakhigarhi, in Haryana, Hastinapur in Uttar Pradesh, Sivasagar in Assam, Dholavira in Gujarat and Adichanallur in Tamil Nadu. In addition, `3,150 crore has been allocated for the ministry of culture for 2020-21, up from `2,843.32 crore in 2018-2019 and `3,042.35 crore in 2019-2020.

Conservationists, however, feel that a concerted push is still missing. Besides, conservation is a multilayered task in India. Some structures are under the Archaeological Survey of India’s protection, some are looked after by the state or local municipal authorities, while the rest have been ‘adopted’ under corporate social responsibility initiatives of private corporations. This creates problems due to multiplicity of authorities.

Rachel Kyte, World Bank vice president for Sustainable Development, had said that “Heritage anchors people to their roots, builds self-esteem, and restores dignity. Identity matters to all vibrant cities and all people.”

While economic growth is understandably the Indian government’s primary tool to pull millions out of poverty, the salience of art and culture as agents of empowerment cannot be underestimated either.

Click here to see Forbes India’s comprehensive coverage on the Covid-19 situation and its impact on life, business and the economy​

(This story appears in the 25 September, 2020 issue of Forbes India. You can buy our tablet version from Magzter.com. To visit our Archives, click here.)