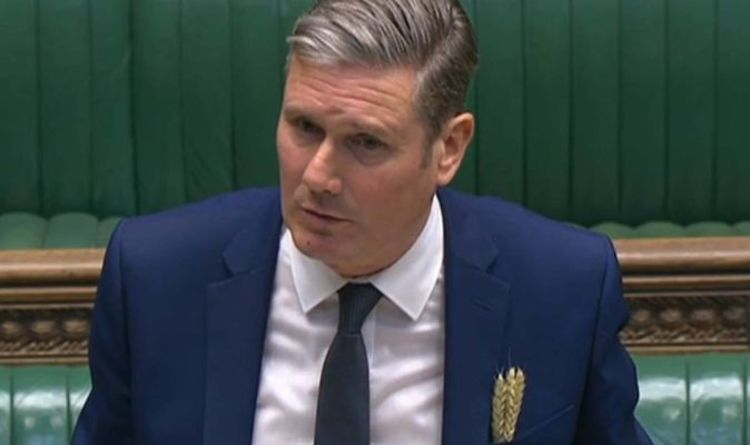 “Furthermore, with the EU currently refusing to give Britain a Canada-style free trade deal, and instead bind us into EU law on state aid, keep control of our fishing and put a customs border between Great Britain and Northern Ireland – they’re treating us with contempt.”

Mr Holden added that Sir Keir is appearing to be on the side of the EU over the Withdrawal Agreement.

He said: “As such, we need to have the option of a ‘break glass moment’ to save the Union if, and only if, the EU refuses to give us the right deal by the end of the year.

“The fact that Labour would rather break up the UK than push back against the EU shows that under Starmer they’re the same as under Corbyn – which shouldn’t be a surprise because Starmer wrote Corbyn’s Europe policy.

“We need strong leadership on this and that’s what’s being provided by the Government.

“The question the British people need to ask themselves is ‘what side is Sir Keir Starmer on?'”

Standing in for Sir Keir, who was self-isolating at his home, Mr Miliband said Mr Johnson had only himself to blame for signing up to the Withdrawal Agreement.

He said: “Either he wasn’t straight with the country about the deal in the first place or he didn’t understand it.

“Because a competent government would never have entered into a binding agreement with provisions it could not live with.”

On Wednesday, Mr Johnson said he did not believe the EU was negotiating in good faith over the Withdrawal Agreement.

This is despite Northern Ireland Secretary Brandon Lewis telling MPs earlier on Wednesday that they were.

The Prime Minister told the Liaison Committee Bill provides a “belt and braces protection” against “extreme interpretations of the (Northern Ireland) protocol” by the EU.

When challenged over Mr Lewis’s belief that they were acting in good faith, Mr Johnson said: “It’s always possible that I am mistaken and perhaps they will prove my suspicions wrong.”

He was also asked about the flow of food supplies to the UK in the event of a “basic no deal” Brexit situation with the EU in January.

Mr Johnson told the Commons Liaison Committee: “I’m confident that we will be able to keep things flowing smoothly at the border, or as smoothly as we possibly can.”