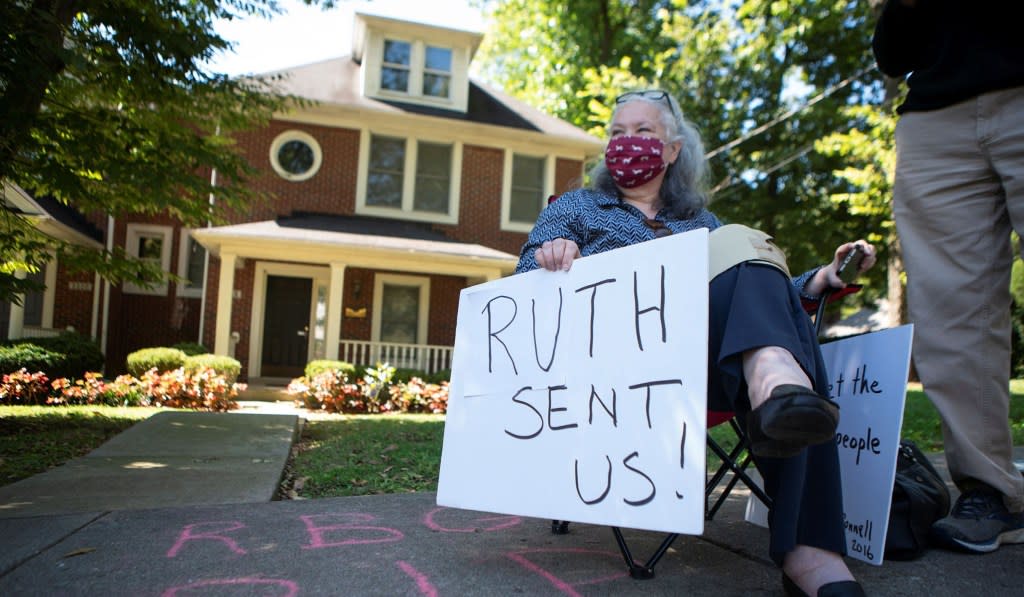 Demonstrators Gather at Homes of Senators McConnell, Graham to Push for Delay in Supreme Court Confirmation

Protesters gathered outside the home of Senate Majority Leader Mitch McConnell (R., Ky.) on Sunday and of Lindsey Graham (R., S.C.) on Monday morning in an attempt to pressure the two Republicans to delay the confirmation of a new Supreme Court justice.

Members of anti-Trump activist group Shutdown D.C. and anti-global-warming group the Sunrise Movement gathered at Graham’s house in Washington, D.C., at about 6 a.m. on Monday. Demonstrators banged on drums and cymbals and turned on strobe lights, while several made speeches calling for the winner of the November presidential election to nominate a justice.

“I want to unpack for a second just how messed-up it is that an old rich white man like Lindsey Graham has so much power in this country,” one activist said through a megaphone. “The Senate is America’s most structurally-racist institution…that stands as a rebuke to democracy and is a bulwark of white power.”

“DC residents will be fighting for their children and grandchildren early Monday morning, by insisting that Trump should not be allowed to fill his third lifelong Supreme Court appointment, tipping the court for generations,” the groups said in a statement.

Additionally, roughly 100 protesters stood outside McConnell’s home in Louisville, Ky., on Sunday chanting “Hey hey, ho ho, Mitch McConnell has got to go” and calling to “vote him out!”

Both McConnell and Graham have both said a vote on Trump’s nomination should move forward, although it is not clear if the Senate will hold the vote before the elections or during the pre-inauguration lame duck session. President Trump on Monday said he would reveal his nomination this coming weekend, and that a confirmation vote should occur as soon as possible.

The protests outside McConnell’s and Graham’s homes are the latest example of a tactic that demonstrators have used across the U.S. over the summer. Demonstrators have gathered to advocate defunding the police at the homes of Seattle mayor Jenny Durkan as well as Portland mayor Ted Wheeler, and rioters even started a fire in the street outside Wheeler’s residence in late August.

Chad Wolf, the acting director of the Department of Homeland Security, was subjected to the same treatment at his Arlington, Va. home in July.

← HomeAid, Moriarty Construction donate remodel work for The Women’s Home
Despite improvements, Oklahoma is miles from completing upgrade of roads and bridges | Govt-and-politics →