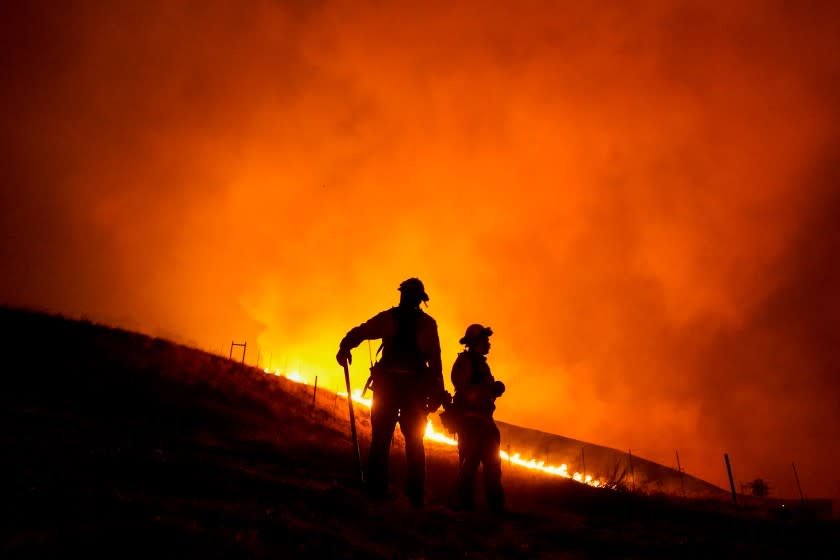 California wine country was devastated by yet another series of wildfires overnight as flames destroyed numerous homes and other buildings in Napa and Sonoma counties and thousands were forced to run for their lives in the darkness of night.

A number of homes began to burn early Monday in the suburban eastern neighborhoods of Santa Rosa. The city of 177,000 residents, Sonoma County’s most populous, was devastated three years ago by the Tubbs fire — also driven by strong winds — that destroyed about 1,500 homes in the northwestern Coffey Park neighborhood, which was mostly built in the 1980s.

Whipped by powerful hot and dry Diablo winds coming from the north and east, which showered embers onto the city, flames engulfed houses in the area of Mountain Hawk Drive, which is lined with two-story tract homes in the Skyhawk development, built in the late 1990s and early 2000s.

The number of structures lost was still unclear.

Deer were seen fleeing as firefighters battled the flames before dawn Monday.

Large swaths of Santa Rosa were under mandatory evacuation orders. Districts in the city’s northeast were ordered to empty, including the neighborhoods of Calistoga, Skyhawk, Melita, Stonebridge, the Oakmont retirement community and Pythian.

Busloads of older people were evacuated from the Oakmont Gardens assisted-living community as flames could be seen in the distance. Elsewhere in the city, cars jammed narrow roads as residents heeded evacuation orders.

Two other fires were also burning upwind of the fire encroaching on Santa Rosa, both of them flanking the town of St. Helena in Napa County: the Boysen fire to the west and the Glass fire to the north.

The Glass fire burned rapidly Sunday through Napa Valley’s famed Silverado Trail, known for its wineries. One building in flames was the distinctive stone structure at the Chateau Boswell Winery, which marked its 40th anniversary last year, several miles northwest of St. Helena.

Ash could be seen falling from the sky throughout the region, with one resident tweeting that the flakes were so large “you can hear them raining on the patio umbrella.”

In Napa County, mandatory evacuation zones had been expanded to cover the hills on both sides of the northern Napa Valley, flanking the towns of St. Helena and Calistoga.

A mandatory evacuation zone included the western portion of St. Helena, an area that includes single-family houses and a campus of the Culinary Institute of America, a renowned culinary college.

The Diablo winds have plunged much of Northern California into a red flag warning, meaning the National Weather Service has high confidence of dangerous fire weather conditions.

The three wine country fires were burning in an area that has not experienced a major burn in the last century, Matt Roberts, a doctoral student in atmospheric science at the University of Nevada at Reno, said in a tweet.

Wine country was not the only danger zone Sunday night.

The Butte County Sheriff’s Office issued an evacuation order for Pulga and Concow and an evacuation warning for the town of Paradise, which was mostly destroyed in the 2018 Camp fire that resulted in 85 deaths and the loss of more than 18,000 structures.

Strong winds were reported in Shasta County, where a fast-moving wildfire ignited Sunday afternoon near the rural community of Igo, about nine miles southwest of Redding. The blaze grew from 50 acres to 400 acres in about a half-hour, according to Cal Fire, prompting evacuation orders and sending up a massive plume of smoke.

Named the Zogg fire, it had grown to 7,000 acres by Sunday night.

The new threat of wildfire in wine country began before sunrise Sunday.

In Napa County, the Glass fire has burned at least 2,500 acres after starting about four miles northwest of downtown St. Helena, according to the California Department of Forestry and Fire Protection, and was burning “with a dangerous rate of spread.”

Crews reported no containment as of Sunday night, with the fire continuing to grow rapidly. The sheriff’s office posted a video of flames burning vegetation on the ground and tree limbs along a road, as thick embers struck the windshield.

Glass Fire: Never wait til the last second to evacuate. This video is from Deputy Matt Macomber, one of several deputies currently evacuating parts of Napa County. pic.twitter.com/YQXFirJ0aV

The fire was burning through dry brush, running uphill as it was pushed by winds, Zander said.

“It’s rugged, steep terrain and limited access, and a lot of it is one-way-in, one-way-out type of roads,” posing difficulties to both getting fire crews into the area and getting evacuees out, Zander said.

Adventist Health St. Helena hospital suspended operations and evacuated its patients due to the fire. “We’re in close communication with fire officials and began transferring some patients early this morning as a precaution,” Dr. Steven Herber, the hospital’s president, said in a statement Sunday.

Strike teams that included both ground and air ambulances took about 50 patients to other area hospitals, “out of an abundance of caution, knowing what we’ll be up against,” said Janet Upton, public information officer for Napa County’s emergency operations center.

The county, supported by the American Red Cross, opened an evacuation center at Crosswalk Community Church in Napa. The center wasn’t sheltering people due to the coronavirus outbreak, but evacuees could go there to be placed in area hotels. About 150 people had taken advantage of the service as of Sunday afternoon, Upton said.

“This emergency operation center’s been stood up for the COVID response since March and we’ve been planning for what we call an incident within an incident, which is, for example, these wildfires,” Upton said. “And the planning’s paid off so we have the sheltering services in place to deal with basically wildfire in the time of COVID.”

Emergency officials were being particularly cautious when deciding what areas to evacuate because of the hot, dry and windy weather forecast as night fell Sunday, which raised fears of even more rapid fire growth and unpredictable behavior.

“We are preparing in advance for the winds,” Zander said. “So we’re going to be more precautious when it comes to evacuations and try to get those out ahead of time, to keep things rolling earlier than later.”

With winds pushing embers from the northeast toward the southwest, two more fires appeared southwest of St. Helena on Sunday night — the Boysen fire on the southwestern side of the Napa Valley and the Shady fire even farther to the southwest.

The National Weather Service’s red flag warning of dangerous fire weather is in place until 9 p.m. Monday. Meteorologists warned about strong winds coming from the north and northeast, with gusts of up to 50 mph at the highest elevations, and critically low humidity.

“We’re expecting another round of gusty winds overnight tonight into tomorrow morning, mainly at higher elevations, so above 1,000 feet or so,” Anna Schneider, meteorologist with the National Weather Service in Monterey, said Sunday. “But we are also expecting some gusts below that of 20 to 30 mph.”

The conditions are the result of an area of high pressure that is sitting off the coast and expected to shift into the Pacific Northwest on Monday, creating an offshore flow that is bringing warmer and drier air over the land, Schneider said.

The fire weather warnings were issued for areas including the North Bay and East Bay Hills, as well as the Bay Area’s interior valleys, the Sacramento Valley, the northern Sierra and mountainous areas of the North Coast.

The Bay Area is also under a heat advisory until 7 p.m. Monday, as Diablo winds associated with the high-pressure system strengthening over the region brought yet another severe heat wave, the weather service said. The weather system cut off the typical afternoon cooling sea breezes and marine layer as hotter air comes in from the north and east.

Santa Rosa was forecast to hit a high of 100 degrees Monday.

California has seen more than 3.7 million acres burn this year — a record in the state’s modern history, causing the deaths of at least 26 people and destroying more than 7,000 structures.

Five of the six largest wildfires in California’s modern record were fires ignited this year, and they’re still burning, according to Cal Fire.

Though the fire has been burning since mid-August, new evacuation orders were issued Sunday for parts of Mendocino and Trinity counties, and new warnings were issued for part of Humboldt County.

The Creek fire in Fresno and Madera counties, which burned through the Sierra National Forest and forced the air evacuation of hundreds of campers cut off by flames, is 39% contained after burning more than 300,000 acres. The Creek fire has destroyed more than 800 structures.

The SQF Complex fire — which includes the Castle fire — in the Sequoia National Forest in Tulare County has burned more than 149,000 acres, destroyed more than 200 structures and is 44% contained.

The LNU fire has destroyed more than 1,400 structures, and the SCU fire, more than 200.

The CZU Lightning Complex fire, which burned more than 86,000 acres and destroyed more than 1,400 structures in Santa Cruz and San Mateo counties and resulted in one death, is 100% contained.

← Will the low rates continue?
Netball commits to Indigenous improvements →