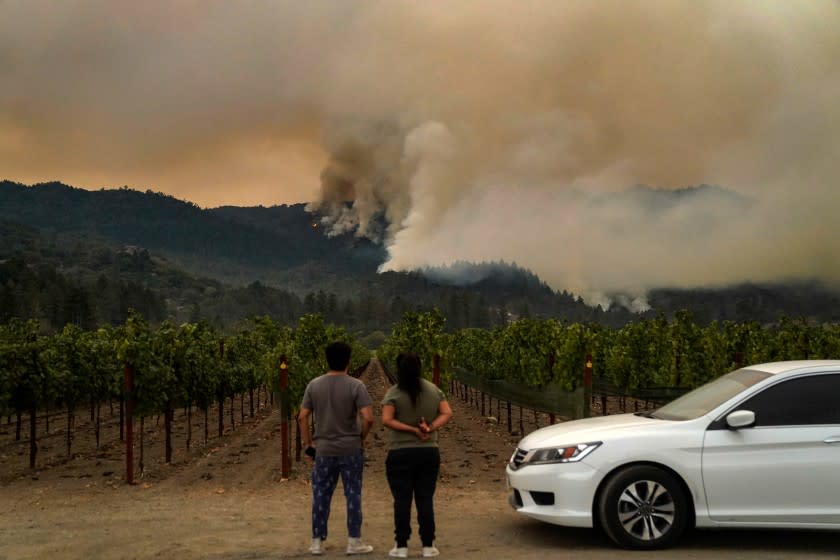 At least 80 homes have been destroyed in Napa and Sonoma counties as the Glass fire continues to rampage through Northern California’s wine country.

The blaze had burned 42,560 acres as of Tuesday — nearly quadrupling in size since Monday morning — and there is still no containment, according to Erick Hernandez, a public information officer with the California Department of Forestry and Fire Protection.

So far, Hernandez said, crews had confirmed that the fire has destroyed 52 residences in Napa County and 28 in Sonoma County.

Figures on how many commercial structures had been affected were not available Tuesday morning, he said.

The fire burned rapidly Sunday through Napa Valley’s Silverado Trail, raising concerns about the fate of the area’s famed wineries.

Napa and Sonoma counties are home to more than 800 wineries, according to their tourism associations, and many are family owned.

One building that was lost was the distinctive stone structure at the Chateau Boswell Winery, which marked its 40th anniversary last year.

Santa Rosa Fire Chief Tony Gossner said Tuesday that his department has called in all possible personnel to fight the Glass fire.

“Every available firefighter that could work came to work,” he said during a briefing, noting that crews’ top priorities for Tuesday are extinguishing the fire and maintaining perimeter control.

Of particular focus is the mountainous area between Calistoga and Angwin.

Though Cal Fire officials could not immediately confirm the acreage breakdown by county, they emphasized that California’s wildfire-fighting infrastructure is “one of the strongest and most diverse in the nation.”

“This is a large fire,” Cal Fire Unit Chief Shana Jones said. “We’re at 42,000 acres covering two counties. That is a lot of territory, and it’s a lot of work.”

Although no injuries have been confirmed, tens of thousands of people have been forced to flee from the fire.

Large swaths of Santa Rosa remain under mandatory evacuation orders, as does the entire city of Calistoga, a Napa Valley community of about 5,000 people.

Evacuations also have been issued for the Summerfield and Spring Lake areas, according to the Santa Rosa Police Department, along with areas covering Trione-Annadel State Park and the area to the south, as well as north of Bennett Valley Road, west of Savannah Trail and east and south of the Santa Rosa city limits.

Evacuation orders also are in place for the hills on both sides of the northern Napa Valley, flanking Calistoga and St. Helena, and parts of the east side of the Silverado Trail.

Officials have urged residents to comply with those directives — saying some of those who refused to leave had to be rescued from their homes later, placing further strain on law enforcement and public safety personnel already stretched thin by California’s historic fire season.

Newsom has declared a state of emergency in Napa and Sonoma counties — as well as Shasta County, where the Zogg fire has burned more than 40,000 acres and killed three people.

The governor has also requested a disaster declaration from the federal government, which would bring increased aid to Los Angeles, Fresno, Madera, Mendocino, San Bernardino, San Diego and Siskiyou counties.

The Glass fire is the latest to besiege Northern California’s wildfire-weary wine country.

Dozens of people were killed and more than 9,000 structures were lost in 2017, when fires swept through Santa Rosa and surrounding communities. Last year, the Kincade fire menaced the region for weeks, putting nearly 100,000 people under evacuation orders. More than 50% of Lake County to the north of Santa Rosa has burned in the last decade.

Sonoma County Sheriff Mark Essick said that “we are all dealing with significant fire fatigue.”

“This is the fourth major fire in our community since 2017,” he said Tuesday. “Many people are feeling the effects, and many people are evacuating and have evacuated multiple times.”

For many, the latest fire carries with it an unwelcome wave of memories: the terror of having to evacuate and the uncertainty of not knowing whether their homes were spared from the flames.

“The Tubbs trauma is real,” said Rincon Valley resident Randi Cornwall, referring to the 2017 fire that devastated the region. “When you have seen fire move fast before, you know to get the hell out before traffic backs up and fire is licking at your cars.”

Some, however, were hesitant to flee. Monday morning, Ben Illia stood in the frontyard of the gray ranch house where he grew up. He was watering down the landscape with a hose.

A veteran of the Tubbs fire, he had no plans to leave unless “I see flames coming over the hill,” he said.