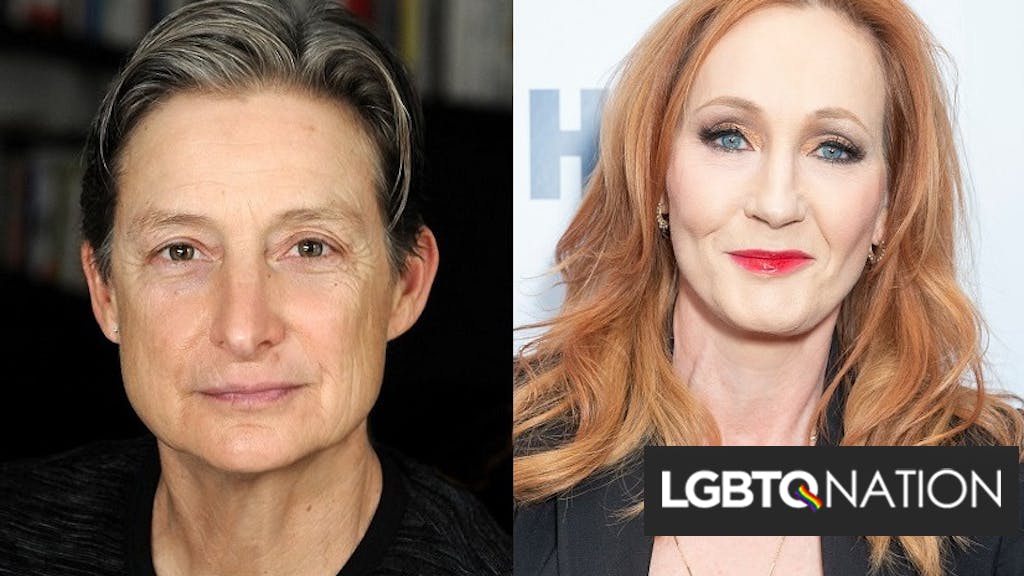 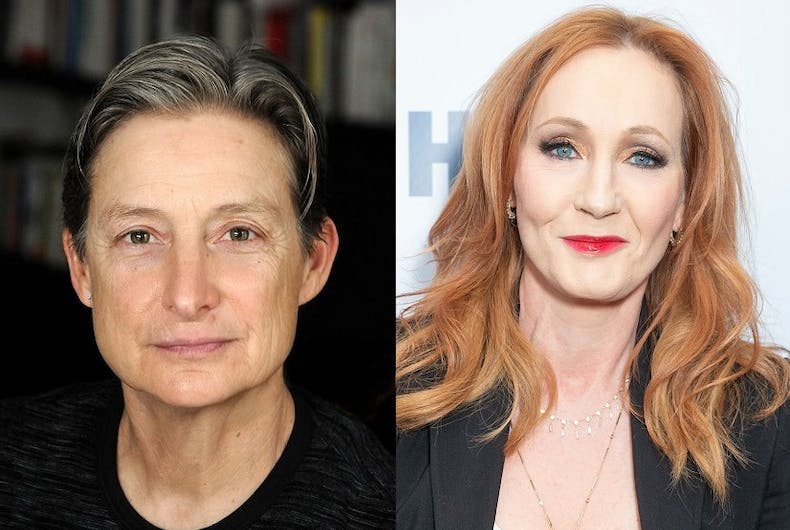 In an interview with a British newspaper, Butler was asked about Rowling’s past statements that transgender women are a threat to cisgender women, and the legendary author of Gender Trouble let Rowling have it.

“A domain of fantasy is at work, one which reflects more about the feminist who has such a fear than any actually existing situation in trans life,” Butler said.

And Butler was clearly not feeling the fantasy. She called out TERFs like Rowling who believe “that the penis is the threat, or that any person who has a penis who identifies as a woman is engaging in a base, deceitful, and harmful form of disguise.”

“Trans women are often discriminated against in men’s bathrooms, and their modes of self-identification are ways of describing a lived reality, one that cannot be captured or regulated by the fantasies brought to bear upon them. The fact that such fantasies pass as public argument is itself cause for worry.”

The interviewer tried to call Butler out, saying that some TERFs say that the word “TERF” is a slur. But Butler wasn’t having it.

“I am not aware that TERF is used as a slur,” she said. “I wonder what name self-declared feminists who wish to exclude trans women from women’s spaces would be called? If they do favor exclusion, why not call them exclusionary? If they understand themselves as belonging to that strain of radical feminism that opposes gender reassignment, why not call them radical feminists?”

She compared TERFs’ arguments to “Trump’s position that gender should be defined by biological sex” and “the evangelical and right-wing Catholic effort to purge ‘gender’ from education.”

Butler didn’t even let Rowling and other TERFs claim to represent feminism.

“One clear problem is the framing that acts as if the debate is between feminists and trans people. It is not,” she said. “One reason to militate against this framing is because trans activism is linked to queer activism and to feminist legacies that remain very alive today.”

The interviewer then tried to make this about how TERFs are the real victims. She asked Butler about “toxicity” online and “threats of violence and abuse… against people like J.K. Rowling.”

Butler showed her mastery of shade: “I think we are living in anti-intellectual times….”

“I confess to being perplexed by the fact that you point out the abuse leveled against J.K. Rowling, but you do not cite the abuse against trans people and their allies that happens online and in person.”

Butler discussed the very real problem of harassment and violence that transgender people face all over the world, which she argued is at least as important as some tweets.

“It won’t do to say that threats against some people are tolerable but against others are intolerable,” Butler said.

Gender Trouble was published 30 years ago and is one of the most important works of 20th century LGBTQ scholarship.

In the book, Butler argues that the distinction between sex and gender is not very clear and that both are socially constructed. Biological sex, for Butler, is not an objective reality upon which the social construct of gender is imposed – sexed bodies can’t signify without gender and in fact the notion of having a biological sex is a cultural effect of gender.

These are important ideas for when the right tries to restrict the rights of transgender – or even some cisgender – people based on “biological sex.” Social conservatives generally believe that it’s easy to determine who has a male or female body, but when pressed they can’t even describe how they could even determine someone’s sex without massively violating people’s privacy with genital exams or DNA tests in a system that fails to account for intersex people.

In other words, biological sex is a fundamental truth that determines gender and affects everything about a person’s life… and also you can’t determine it by looking at a person’s life so instead you have use invasive tests that can’t always provide a conclusive result. It can’t be both.

Her work is sometimes used to argue against transgender rights, saying that her notion of gender as a social construct contradicts the idea that people can have a deep sense of their own gender identity.

But Butler has long been an advocate of transgender equality. In 2014, she told Trans Advocate that it really comes down to how everyone “should be free to determine the course of one’s gendered life.”

“Gender assignment is a ‘construction’ and yet many genderqueer and trans people refuse those assignments in part or in full,” she said at the time. “That refusal opens the way for a more radical form of self-determination, one that happens in solidarity with others who are undergoing a similar struggle.”

“One problem with [the TERF] view of social construction is that it suggests that what trans people feel about what their gender is, and should be, is itself ‘constructed’ and, therefore, not real. And then the feminist police comes along to expose the construction and dispute a trans person’s sense of their lived reality. I oppose this use of social construction absolutely, and consider it to be a false, misleading, and oppressive use of the theory.”