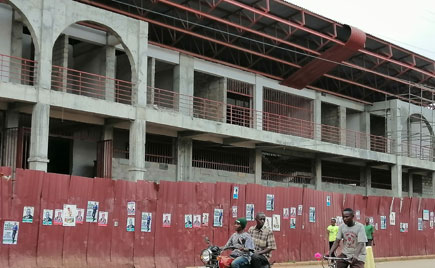 Government through the Ministry of Local Government has given the contractor for Masaka Central Market up to November 30 to complete the work and handover the project or risk a penalty.

The market project, which is funded by African Development Bank and Ugandan government at a tune of Shs18.4b, is a joint venture between Multiplex Ltd and Alshams Construction Company Ltd.

The construction of the market, which commenced in February 2018, was expected to be completed by February, but up to now, the work is still at about 83 per cent.

Since the commencement of the project, the contractor has asked for extension of contract duration three times to enable him to complete the work, but government has indicated that no more extension will be granted after November 30.

While inspecting the project, which is at the roofing level at the weekend, Local Government minister Raphael Magyezi said the project is behind schedule compared to other markets across the country that started around the same time.

“After November 30, government  will have no option but to cut the contractor’s payments which may cost him about Shs10 million each day he will take before completing the job .I am tired of stories, what I need now is to have the market complete and I invite the President to commission it ,” the minister said.

He advised the contractor to swiftly look for necessary resources and also hire more manpower, machinery to ensure that work is completed.
Mr Moses Ndege Bbosa, the managing director of Multiplex Ltd, blamed the delay on continued change of redesigns for the market.

“Just like other people have been affected by Covid-19 pandemic. The changes in designs have greatly affected us, keeping us behind schedule, but we promise this time to complete the work by end of   November,” he said, adding that they are remaining with painting and improving rest rooms for women.

The Masaka City clerk, Mr John Bahangane, said the contractor was initially deploying limited manpower, which delayed the work, but they have since increased the number of workers.

The Masaka City mayor, Mr Godfrey Kayemba Afaayo, said the delays have greatly affected the traders since they are operating in an open space, which inconveniences them whenever it rains.

Ms Elizabeth Nakayiza, the chairperson of the Masaka Central Market Vendors Association, welcomed the minister’s advice to turn the space allocated for a parking space at the rooftop into stalls, saying it will accommodate more 100 vendors.

The government had anticipated to redevelop 21 markets across the country between 2009 and 2014, but due to late release of funds and management wrangles among vendors, the construction works delayed.

The old Masaka Central Market structure, which was constructed in 1936, was pulled down two years. It has been housing more than 1,000 vendors. The new market once completed is expected to have working space for more than 2,000 vendors.

It will have an agro-processing facility, stalls, lockups, shops, restaurants, a parking yard, loading and offloading areas. It will also have drainage ways, solid waste bays, and firefighting facilities.