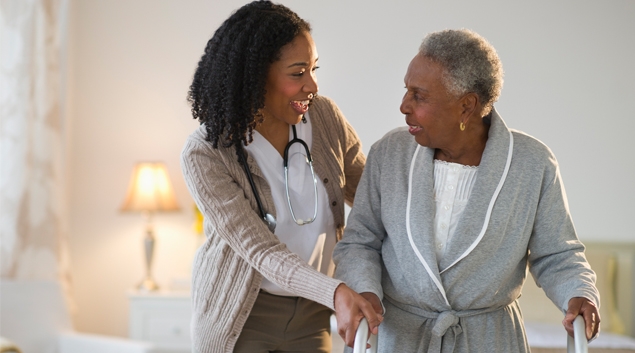 Older racial and ethnic minority residents and their caregivers bear the severest brunt from COVID-19 across the entire spectrum of U.S. nursing homes and assisted living communities, University of Rochester Medical Center researchers report in two studies published in the Journal of the American Geriatrics Society.

For example, nursing homes with disproportionately higher numbers of racial and ethnic minority residents reported two to four times as many new COVID-19 cases and deaths per facility than other nursing homes for the week of May 25.

The findings — the first to be reported based on newly mandated, weekly data reported from 15,587 U.S. nursing homes to the Centers for Medicare and Medicaid Services — are also the first to document the disproportionate impact on racial and ethnic minorities in nursing homes across all states.

Disparities of this magnitude, said Dr. Yue Li, professor of public health services, suggest that long-standing, fundamental inequalities in nursing homes resulting from segregated facilities with limited resources and poorest quality of care are being “exacerbated by the pandemic.”

A first-ever empirical study involving the incidence of COVID-19 in U.S. assisted living communities showed a four-fold higher case fatality in these communities, compared to the counties in which they are located. The findings are based on data from seven of 13 states that publicly reported COVID-19 data from nursing homes and residential care settings through May 29.

Unlike nursing homes, assisted living communities are not subject to federal regulation; they are regulated by the states “with varying degrees of rigor,” authors said.

Several factors leave them ill prepared to deal with a pandemic. For instance, assisted living communities are often financially challenged, care for increasingly sicker residents, operate under limited oversight and experience staff and PPE shortages. The workers providing daily care are often personal care aides rather than certified nursing assistants or registered nurses, and receive little if any training in the use of PPE.

Moreover, unlike nursing homes — which have recently been required to collect and report COVID-19 case and death data to CMS — there’s no system at all to report such data for assisted living communities.

The authors were able to combine state-reported data for 4,685 assisting living communities in Colorado, Connecticut, Georgia, North Carolina, New York, Ohio and South Carolina with a 2019 national inventory of assisted living communities and Medicare beneficiary data for residents of those communities, which the researchers had prepared as part of another project.

They found that, whereas the percentage of COVID-19 deaths ranged from 3.32% of the overall number of cases in North Carolina to 9.26% in Connecticut, the percentage of COVID deaths in assisted living communities in those states ranged from 12.89% to 31.59% — even though fewer than 10% of assisted living communities reported being affected by the pandemic.

WHAT ELSE YOU SHOULD KNOW

By July 30, 362,000 people in virtually every U.S. nursing home were infected with the virus, representing about 8% of all cases in the country. At least 62,000 nursing home residents died of COVID-19, representing 41% of all COVID-19 deaths nationally.

The CMS Nursing Home COVID-19 Public File used by Li’s team includes weekly counts of cases and deaths among nursing home residents and staff, as well as facility capacity, staff and supplies of PPE, as reported by individual nursing homes to the Centers for Disease Control and Prevention. The researchers used the first available weekly count (May 25-31) and compared it to several other databases.

Of the 12,576 nursing homes whose data passed CMS quality assurance checks, those with higher proportions of racial/ethnic minority residents tended to be larger for-profit facilities affiliated with a chain, had more Medicaid residents and lower RN and total nurse staffing hours, and were located in counties with more COVID-19 cases and deaths as of May 31, with lower socio-economic status, and with higher competition for nursing home care.

The predicted counts of cases and deaths per facility were two to four times higher in nursing homes with the highest proportions of racial/ethnic minority residents.

These disparities in rates of COVID-19 cases and deaths mirror pre-pandemic studies showing that nursing homes with lower resources and higher concentrations of racial/ethnic minorities have poorer outcomes. In addition, the research cited nursing home literature that for several decades has indicated that nursing homes remain highly segregated, and that racial/ethnic minority residents tend to be cared for in a small number of facilities located in communities of color with poorest quality of care and highly restricted resources.

Nursing home staff from these communities — especially staff of color who make up more than 50% of nursing home direct care workforces — are more likely to live in crowded households and neighborhoods, travel to and from work by public transportation, and be low-paid with few or no benefits such as paid sick leave, “all placing them at higher risks of COVID-19 infection as well as inadvertent cross-infection with patients,” authors said.

Thus, “immediate actions are needed to ensure that as the pandemic continues to evolve, racial/ethnic minority nursing home residents, and the frontline workers caring for them, do not bear … additional sufferings due to systemic inequalities.”

They recommend that CMS’ weekly reports be expanded to include data collection for these “additional and more nuanced items.”

Earlier this month, the U.S. Department of Health and Human Services, through the Health Resources and Services Administration, announced a $2 billion Provider Relief Fund performance-based incentive payment distribution to nursing homes — the latest update in the previously announced $5 billion in planned support to nursing homes grappling with the impact of COVID-19.

The prior week, HHS announced it had delivered an additional $2.5 billion in payments to nursing homes to help with upfront COVID-19-related expenses for testing, staffing, and PPE needs.

In late August, CMS required nursing homes test staff for the coronavirus, a change from the former policy of simply recommending staff get tested. Nursing homes that fail to meet staff testing requirements risk suspended participation in the Medicare and Medicaid programs. They will be cited for noncompliance and may face enforcement sanctions based on the severity of the noncompliance, such as civil money penalties in excess of $400 per day, or more than $8,000 for an instance of noncompliance.