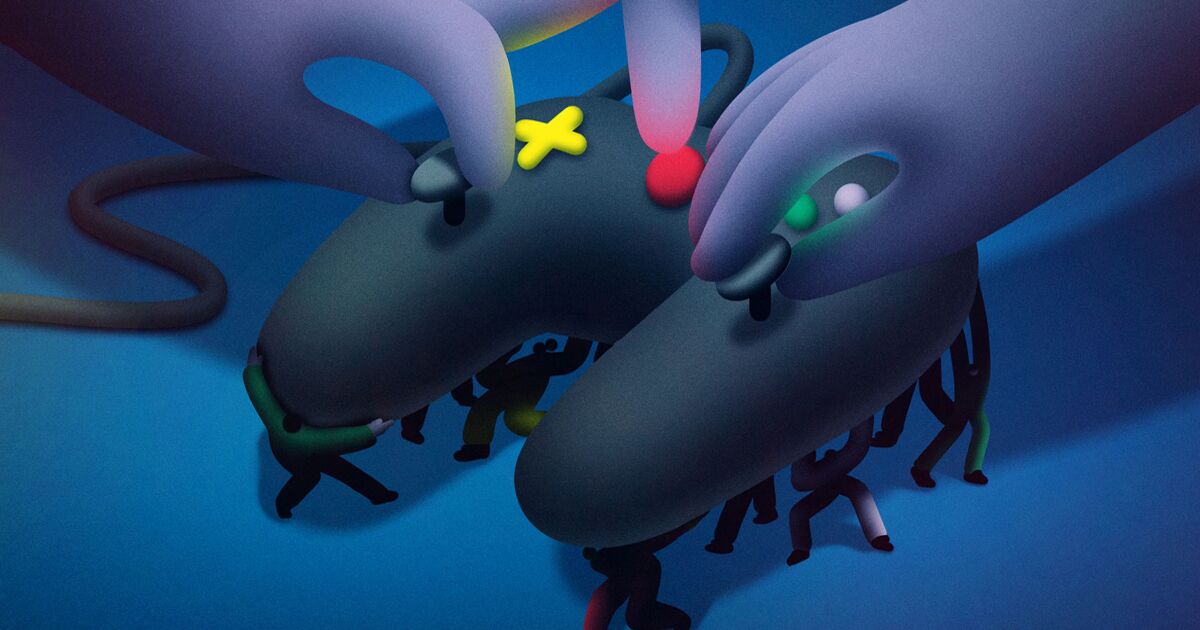 As Christmas 2018 approached, workers at Activision Blizzard Inc. were busy doing what they always do—writing code, modeling characters, and designing landscapes for the next Call of Duty games. At the company’s campus in Santa Monica, Calif., everyone got hand-delivered invitations to the annual holiday bash, where staff could drink, unwind, and celebrate the year. Some recipients, though, were soon told they’d received the invitations by mistake and wouldn’t be welcome at the party, according to three people familiar with the incident. The reason: They were temporary contractors officially employed by a staffing agency, Volt Workforce Solutions.

That treatment isn’t unusual in the gaming industry. While executives rake in millions of dollars and some full-time employees can expect Porsche-size bonuses when a hot new title drops, many people working alongside them get nothing but a salary that barely keeps them above the poverty line.

Their employee badges typically come in a different color. They rarely get paid vacations. Their names sometimes aren’t included in the credits. And when full-time co-workers get pricey swag such as statuettes of game characters, they’re often left out. At one studio, a contractor says they were given cheaper, less comfortable chairs. “Temps will be told that there will be opportunities to prove themselves and possibly transition to full time,” says Emma Kinema, a Communications Workers of America organizer seeking to unionize video game makers. “In reality, the vast majority of people in ‘temp’ roles in the game industry get trapped there forever with terrible conditions, no benefits, low pay, and no ladder for career progression.”

The video game industry employs more than 220,000 people worldwide, according to the Entertainment Software Association. These are backed up by thousands of freelancers who write scripts or draw concept art for studios when needed. Somewhere in the middle are contractors employed by agencies such as Volt, Keywords, and Yoh, who work full-time hours but are frequently treated as lesser employees.

The industry’s prestige—what kid doesn’t grow up wanting to make games for a living?—makes it particularly ripe for labor exploitation. Interviews with more than a dozen contractors, none of whom wanted to be identified for fear of retribution by employers, suggest they’re often essential members of game development teams. These skilled artists, designers, and producers maintain the same long hours as staffers. Sometimes their employment has a specific end date, but their contracts are frequently extended, allowing them to keep their jobs but offering no path to full-time employment. “There are many roles applicable only during a certain point of a project, so contracts are well-suited for these positions,” says Renee Gittins, executive director of the nonprofit International Game Developers Association. “But contracting should not be used as a method to avoid employment expenses.”

Legally, these permatemps occupy a murky space. In 2000, Microsoft Corp. settled a class­-action lawsuit brought by contractors for failing to provide them with benefits, but the case didn’t result in a clear precedent. “This is the Wild West,” says William Gould IV, an emeritus law professor at Stanford Law School and a former chairman of the National Labor Relations Board. A pair of congressmen in July introduced a bill to boost protections for contractors, but the measure hasn’t yet made it out of committee.

The path from the headline owner of a title to the people who write the code and draw the characters can be convoluted. The next Call of Duty, expected this fall, will likely break sales records; the 2018 version, Call of Duty: Black Ops 4, grossed more than $500 million in its first three days alone, according to Activision. Most of the work on the game is done by separate studios owned by Activision, including a Santa Monica company called Treyarch, which hires contractors from Volt. Several current and former Volt employees with Treyarch say their pay is below $20 per hour, forcing them to work nights and weekends to make ends meet.

Their Volt contracts stipulate that they have no right to their host company’s perks. “I acknowledge and agree that I am not eligible to participate in or receive any benefits under the terms of the Company Group’s retirement plans, health plans, vision plans, disability plans, life insurance plans, stock option plans, or any other employee benefit plan, policy, or procedure sponsored or maintained by any member of the Company Group,” reads one contract, reviewed by Bloomberg Businessweek.

Volt didn’t respond to requests for comment. Activision says that its staffing needs fluctuate as games are developed and that it does its best to include agency workers in as many studio activities as it can. (After dismay over the 2018 holiday party, Activision contractors were invited to the 2019 event, according to people familiar with the incident.) The company says that it investigates all complaints about unfair treatment and that fewer than 10% of the 10,000 workers at Activision’s studios come from contracting agencies.

Efforts to shrink the role of temps have had mixed results. In 2014, as Microsoft sought to reduce its reliance on contractors, it instituted an 18-month limit for contract workers to “better protect our Microsoft IP and confidential information,” the company said in a memo at the time. Because it can take years to develop a video game—the latest installment of Microsoft’s Halo franchise has been in the works for more than four years—progress has been disrupted by the departure of contractors at the end of their 18 months, according to people familiar with development. Microsoft says that it encourages external staffers to raise any concerns about their treatment and that it will take action as needed.

The industry’s structure makes it difficult to break out of contractor status. To get a job with a top company requires a portfolio of contributions to finished games, but in Japan some workers say their agencies keep their names out of the credits so other companies can’t poach them. One contractor who’s served as a lead for a major console game says his agency forced him to use a different pseudonym in the credits of every game he worked on. And while there are nascent efforts to forge a sense of solidarity among workers, there are no unions in the U.S. or Japanese video game industry—and legions of eager people are waiting in the wings.

For Chet Faliszek, a founder of independent studio Stray Bombay Co., which is working on cooperative shooter games, there’s a simple solution: Don’t use temps. As Stray Bombay has grown, he’s resisted hiring via agencies even though it would’ve saved him time and money. “While staffers work for middling pay and long hours, they have the promise of bonuses and perks, many of which don’t go to contractors,” Faliszek says. “They get a raw deal.” —With Takashi Mochizuki